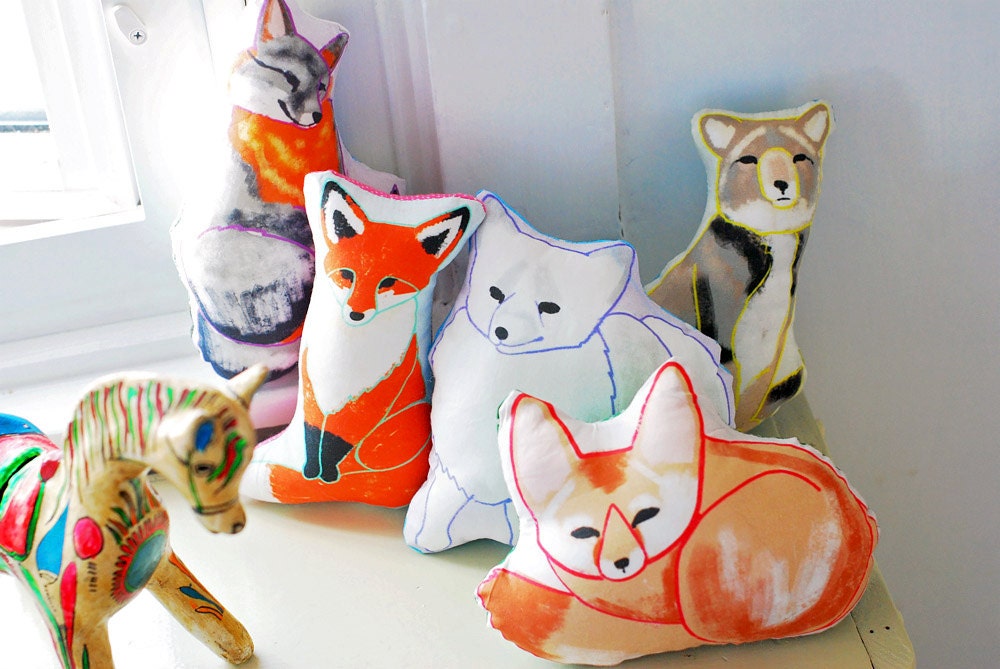 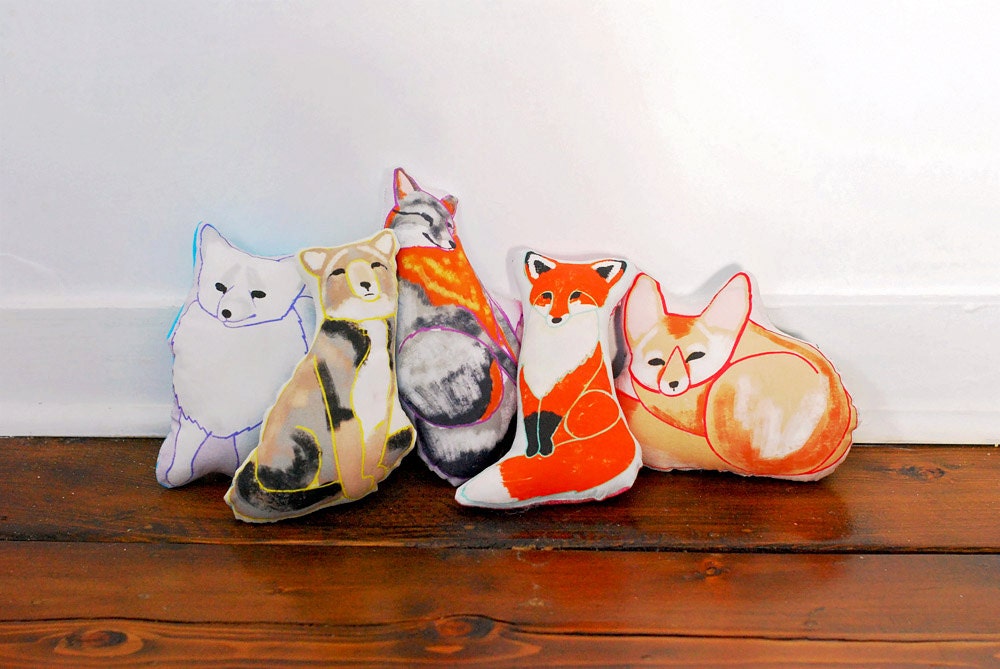 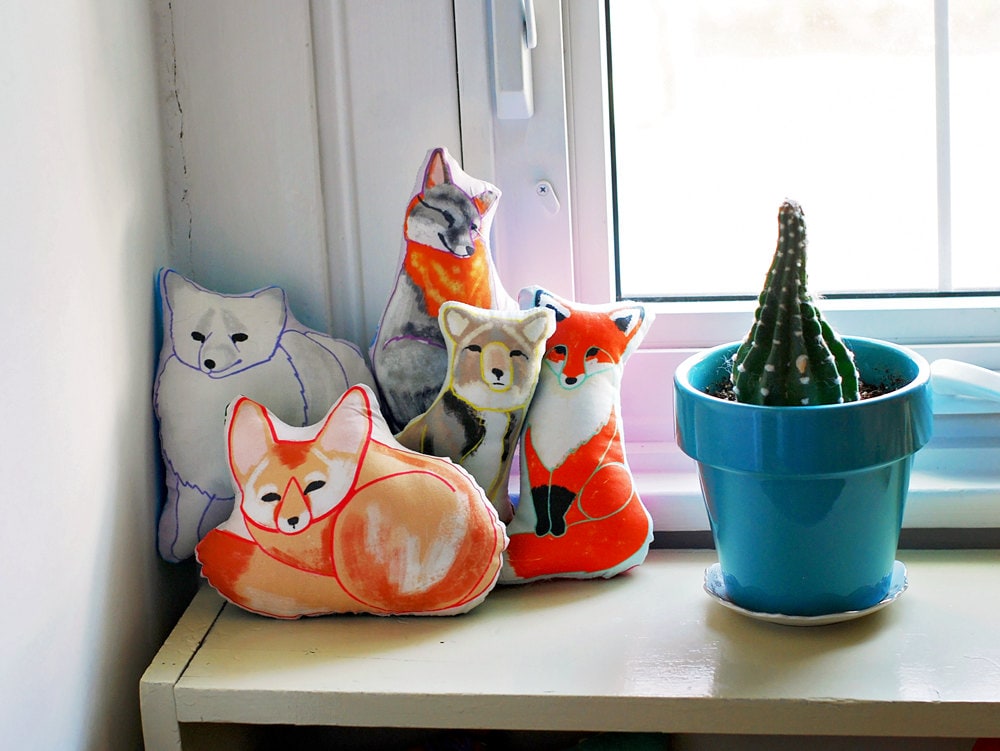 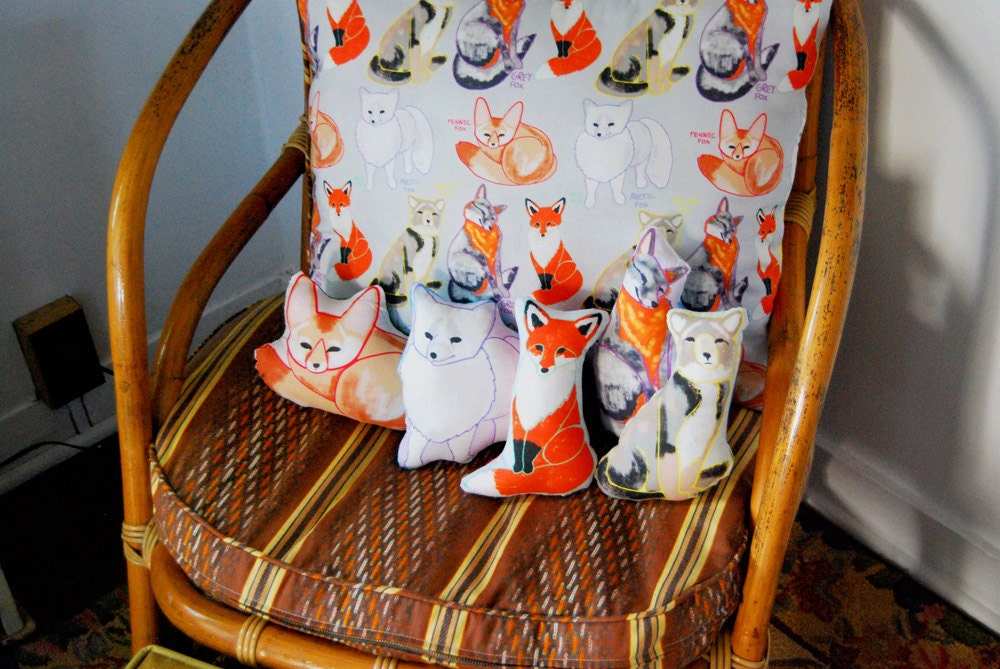 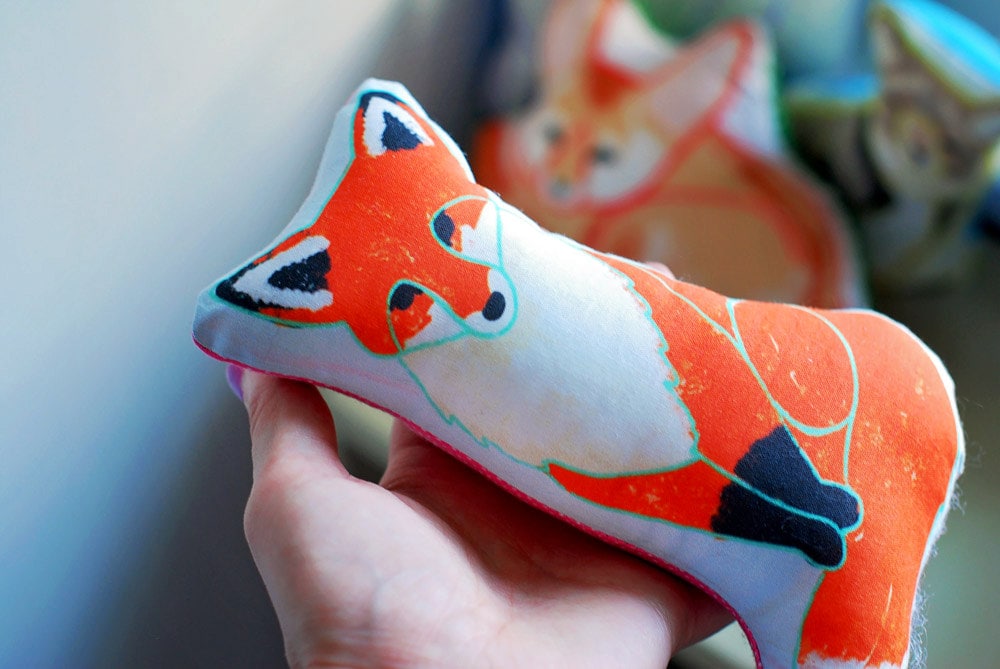 These adorable little accent pillows are made of combed cotton and features the following fox species from my original illustrations. Choose from the following:

The pillows are hand sewn and stuffed with fiberfill and the back fabrics are various quilting fabrics both vintage an new. The back fabric is from my new and vintage fabric collection. Each pillow has a different back depending on what I have in stock.

Pillows vary slightly in size, but they are approx 7" long.

All pillows are lovingly packaged.

Interesting facts about these foxes obtained from factzoo.com:

Tibetan Fox:
Tibetan (sand) foxes live in the barren slopes and stream beds of Asia at altitudes of 9,840–13,120 ft (3,000–4,000 m) in the Mustang District of Nepal, in Tibet and in the Tsinghai, Kansu, and Yunnan regions of China. They make their dens in the nooks and crannies of the boulders.

They have rather square heads and large wise eyes. It almost looks like the heads are too big for the body but that is mostly the shape of the fur. They do have large jaws appropriate for the heavy labor of chewing up all the meals of their meat diet. They have thick fur for the cold weather and thick tails with white tips.

Males and females usually form pairs and stay together throughout their lives. They also may hunt together. The mothers bear from 2-5 young a year which stay with the parents until they are about 8-10 months old.

Distinguishing them from other canines, are their long bodies with long fluffy tails. They aren't always red however.

All of them are known to be highly social, living in groups led by a mated pair that has a monopoly on breeding within the group. They are joined by their young, who remain with the group in order to help care for newborns. They are known to make a number of different vocalizations while communicating with each other.


Gray Fox:
he gray fox lives in the Americas, from the southern border of Canada down through Central America to South American. It has mostly gray fur with a white underbelly, black markings and a red tinge around the neck. This fox loves the forests and woodlands and is even known as the tree fox. It climbs trees skillfully and leaps from branch to branch almost like a cat.

Mostly active at night scrounging around for small mammals and insects, the gray fox may also eat fruit and seeds in times of scarcity. Eating fruit makes them slightly more adaptable but not quite as adaptable as their cousin the red fox...

or sleeping quarters the fox and looks for an old burrow, a fallen log with space inside or even a hole inside the living tree for a den. As the foxes are good climbers the sometimes have their dens in trees as high as 30 ft off the ground. In the den is usually found a breeding pair. When a mother gives birth the average number of cubs is four although there may be as many as 10.


Arctic Fox:
The arctic fox is a hardy (though very small) animal that can be found in Alaska and Canada. An adult generally weighs an average of 6 to10 lb (2.7 to 3.5 kg). In the wild, this fox generally lives for 3 to 6 years. It favors small spaces to live in, and will commonly make a den in the side of a hill or cliff for shelter.

Generally, when one pictures an arctic fox, a solid white coat might be the first thing that comes to mind. However, during the summer, the fox sports a less thick brown coat. This keeps it from overheating, as the white coat that the fox is commonly seen with in the winter is the warmest coat of any mammal in the world. This would be problematic during the summer.

Fennec Fox (information from national geographic.com):
The fennec fox is the smallest of all the world's foxes, but its large ears, measuring 6 inches (15 centimeters), appear to be on loan from a bigger relative.

Fennec foxes dwell in the sandy Sahara and elsewhere in North Africa. Their nocturnal habits help them deal with the searing heat of the desert environment, and some physical adaptations help as well.

Their distinctive, batlike ears radiate body heat and help keep the foxes cool. They also have long, thick hair that insulates them during cold nights and protects them from hot sun during the day. Even the fox's feet are hairy, which helps them perform like snowshoes and protects them from extremely hot sand. The fox's feet are also effective shovels for frequent digging—fennec foxes live in underground dens.

I gladly accept returns and exchanges

Ship items back to me within: 30 days of delivery

But please contact me if you have any problems with your order.

The following items can't be returned or exchanged

Because of the nature of these items, unless they arrive damaged or defective, I can't accept returns for:

These are fantastic, I love how big they are and the bright colors! Also, shipped super quickly!

Very cute Fox. Quick shipping. The person I gave it to loves it. Thank you!

Great little fox pillow. My sister loved it. Seller was quick to provide information on shipping which was very very helpful.

0 items in your cart